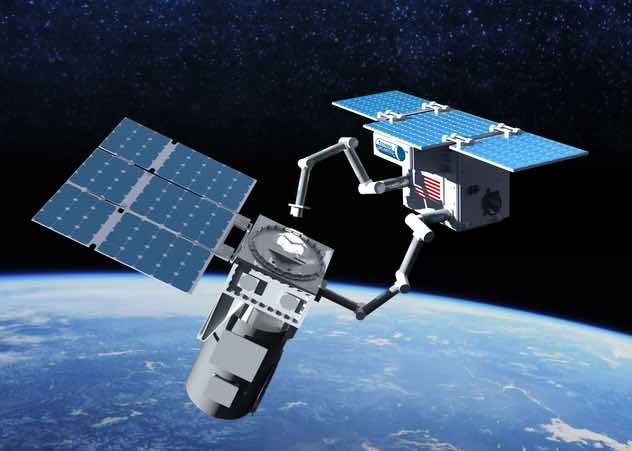 The U.S. government manages an aging satellite fleet that, in some cases, has systems running well beyond their recommended operational life. On rare occasions, the U.S. government has refueled some of its most expensive satellites to keep them operational; however, post-launch serviceability has historically not proven reliable or cost-effective.

Aside from the deterioration of space systems due to harsh conditions, failed deployments have rendered certain systems inoperable immediately after launch, resulting in space debris.

To help provide a new upgrade capability, the Defense Innovation Unit’s (DIU’s) Modularity for Space Systems (M4SS) project is prototyping three modular systems for space vehicles. The objective of this project is to reduce the cost and enhance the utility of future space platforms, orbital transfer vehicles, and serviceable satellites. The project also seeks to make vehicles operating in geosynchronous orbit (GEO) and beyond more upgradable, more capable, and easier to refuel. These systems, currently under development by Tethers Unlimited, Maxar Technologies, and Motiv Space Systems, will enable servicing vehicles to properly equip and assemble modular satellites.

Utilizing a system of modular components eliminates many issues. If systems are built on the ground to accept modular upgrades and components post-launch, issues of technological obsolescence, deterioration, and deployment failure are alleviated. Furthermore, by eliminating the risk of total mission failure if one component fails, the delivery timelines for our most critical systems can be reduced. Modular systems become an insurance policy that allows the DoD to take greater strategic risks in other areas, whether that is redundancy, timeline, cost, or even the longevity of components.

This challenge and opportunity are not unique to the military or government. With launch costs and cadence steadily improving access to space, there is a growing commercial interest in the logistics framework. A government-backed logistics infrastructure reduces the barrier of entry for early-stage technologies and small space companies, and it allows for greater commercial growth. Commercial growth further reduces the risks associated with space technologies, but modularity is a key functionality required for this optimization.

Upon demonstration and evaluation of each prototype, the U.S. government and commercial sector will have integrated subsystems available for purchase.