Problem Statement: Fatigue is a major contributing factor to aircraft mishaps, both within and outside of the Department of Defense (DoD). Fatigue costs the U.S. Air Force (USAF) an estimated $140m every year and places aircrew and public lives at risk. In order to better manage fatigue-related mishaps, the DoD desires an advanced fatigue tracking system to mitigate risks and implement effective countermeasures.

At present, U.S. military aviators are routinely tasked to operate long, mentally tasking, no-fail missions with limited tools to combat fatigue and minimal awareness of any fatigue related risks. The aviation operational risk management (AvORM) program is the current USAF solution for mitigating mishaps associated with pilot fatigue. Current AvORM practices involve a subjective (self-reported) assessment of fatigue to inform “go/no-go” decisions prior to flight. This approach is susceptible to error, given that individual self-reported ratings are often inconsistent with objective (physiological, behavioral) measures of fatigue. Moreover, the AvORM system is limited in its ability to assess future fatigue states and currently only employs a decades-old generic biomathematical model accounting for sleep opportunity and circadian factors. To better meet the challenges of the global mission environment, USAF aviators are in need of a modernized technical solution for tracking, anticipating, and combating fatigue.

The DoD seeks solutions for developing an algorithm that uses readily available commercial-off-the-shelf (COTS) wearables to track and predict cognitive fatigue. Algorithm solutions will be validated against gold-standard assessments of fatigue using the Psychomotor Vigilance Task (PVT). The successful algorithm should account for ≥ 60% of real-time cognitive fatigue and demonstrate a predictive capability of detecting future fatigue prior to fatigue onset. Companies are encouraged to design a solution that can be personalized to an aircrew member, is adaptable to different contexts and inputs, and that can provide both a fatigue snapshot and a fatigue outlook of at least 12 hours (for example, see the below figure). Outlook uncertainty should be low for shorter projections, but may increase significantly for longer projections (e.g., 12-24 hours). 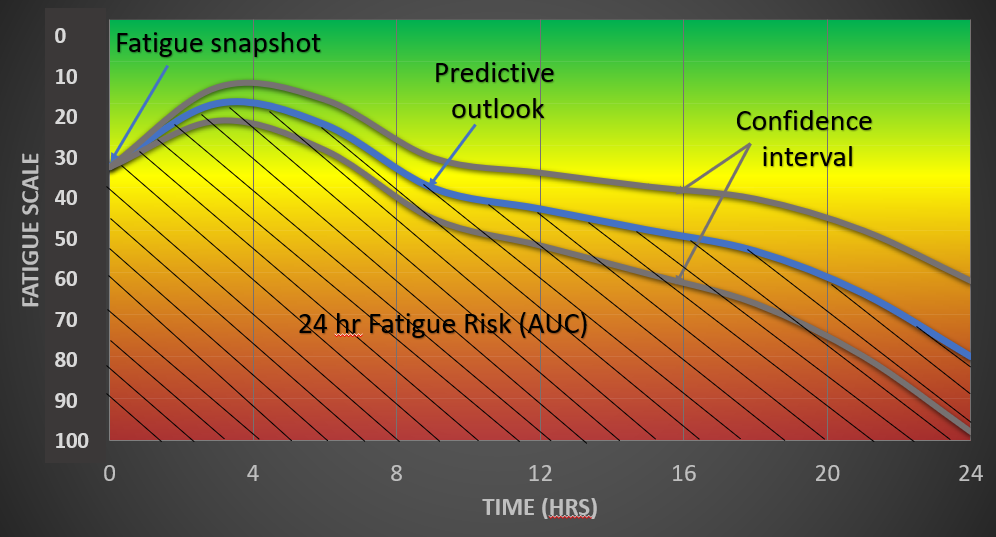 The algorithm must use input from COTS wearable devices. Solutions compatible with finger or wrist-worn devices will be favored over other wearables due to compatibility with cockpit environments, but will not be restricted to these types of wearables. The wearable devices must not have WiFi, microphone, or video recording technology and must be able to easily synchronize data to a cloud infrastructure and repository through existing mobile device applications. The wearable devices must be able to hold at least 12 hours of data on the device between cloud synchronization events. We encourage non-wearable companies with algorithm solutions to partner with a wearable device company for ease of data access. While the DoD has already identified candidate wearable devices to use, companies are encouraged to bring other non-invasive wearables to test, as well.

This will be a competitive 12-month prototyping effort involving only U.S. companies, in conjunction with a human subjects research protocol through Naval Postgraduate School’s (NPS) Institutional Review Board (IRB). The protocol and data collection will all be managed through NPS to include aircrew data using the PVT, Automated Neurosychological Assessment Metrics (ANAM), and a variety of sleep and/or fatigue questionnaires. NPS may also employ research-grade neurophysiological sensors in order to compare against COTS wearables. Biometric data will be collected before, during, and after complex full motion Air Force simulator missions, as well as during live flights in USAF aircraft. The data will then be pushed to a government-owned data repository for selective distribution.

The final deliverable includes a fatigue algorithm capable of scoring biometric data within one hour of data arrival. The successful company will be able to market this algorithm to the commercial sector, but the DoD will retain government purpose rights for usage.

The DoD will retain access to wearable sensor datasets for pre-identified government users. Any participating wearable company desiring to collect and utilize wearable data from government research participants using their own proprietary sensors must agree to allow the government to ingest the data into existing data repositories owned and operated by the government. Wherever possible, the vendor needs to provide access to the lowest level of sensor data available (e.g. electrocardiogram waveform in highest sampling rate available for heart-rate variability analysis). This access could come in the form of sensor data logs or API integration with the feature detection components on the device itself. This biometric data, along with other data, including responses on surveys and the psychomotor vigilance test, will then be made accessible to parties on this contract.

This Area of Interest solicitation will be awarded in accordance with the Commercial Solutions Opening (CSO) process detailed within HQ0845-19-S-C001 (DIU CSO), posted to FBO in Apr 2019. Additionally this document can be found within the DIU Library at www.diu.mil/library.

Any resulting agreement from this AOI will include language requiring your company to confirm compliance with Section 889 of the John S. McCain National Defense Authorization Act for Fiscal Year 2019 (Pub. L. 115-232). If you are unable to confirm compliance with the referenced law, the Government is unable to enter into an Agreement with your company.

Companies are advised that any Prototype Other Transaction (OT) agreement awarded in response to this solicitation may result in the direct award of a follow-on production contract or agreement without the use of further competitive procedures. Follow-on production activities will result from successful prototype completion.

Have a question about this solicitation?

Need clarification? Having technical issues?
Reach out to our team.

Submission Form
Please fill out the following form in its entirety.

We Work With You

If we think there’s a good match between your solution and our DoD partners, we’ll invite you to provide us with a full proposal — this is the beginning of negotiating all the terms and conditions of a proposed prototype contract.

After a successful prototype, the relationship can continue and even grow, as your company and any interested DoD entity can easily enter into follow-on contracts.